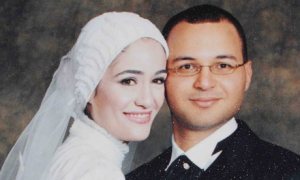 It was while Marwa el-Sherbini was in the dock recalling how the accused had insulted her for wearing the hijab after she asked him to let her son sit on a swing last summer, that the very same man strode across the Dresden courtroom and plunged a knife into her 18 times.Her three-year-old son Mustafa was forced to watch as his mother slumped to the courtroom floor.

Even her husband Elvi Ali Okaz could do nothing as the 28-year-old Russian stock controller who was being sued for insult and abuse took the life of his pregnant wife. As Okaz ran to save her, he too was brought down, shot by a police officer who mistook him for the attacker. He is now in intensive care in a Dresden hospital.

While the horrific incident that took place a week ago tomorrow has attracted little publicity in Europe, and in Germany has focused more on issues of court security than the racist motivation behind the attack, 2,000 miles away in her native Egypt, the 32-year-old pharmacist has been named the “headscarf martyr”.

She has become a national symbol of persecution for a growing number of demonstrators, who have taken to the streets in protest at the perceived growth in Islamophobia in the west. Sherbini’s funeral took place in her native Alexandria on Monday in the presence of thousands of mourners and leading government figures. There are plans to name a street after her.

Sherbini, a former national handball champion, and Okaz, a genetic engineer who was just about to submit his PhD, had reportedly lived in Germany since 2003, and were believed to be planning to return to Egypt at the end of the year. They were expecting a second child in January.

Unemployed Alex W. from Perm in Russia was found guilty last November of insulting and abusing Sherbini, screaming “terrorist” and “Islamist whore” at her, during the Dresden park encounter. He was fined ¤780 but had appealed the verdict, which is why he and Sherbini appeared face to face in court again.

Even though he had made his anti-Muslim sentiments clear, there was no heightened security and questions remain as to why he was allowed to bring a knife into the courtroom.

Angry mourners at the funeral in Alexandria accused Germany of racism, shouting slogans such as “Germans are the enemies of God” and Egypt’s head mufti Muhammad Sayyid Tantawy called on the German judiciary to severely punish Alex W.

“Anger is high”, said Joseph Mayton, editor of the English-language news website Bikya Masr. “Not since Egypt won the African [football] Cup have Egyptians come together under a common banner.”

In Germany the government of Angela Merkel has been sharply criticised for its sluggish response to the country’s first murderous anti-Islamic attack. The general secretaries of both the Central Council of Jews and the Central Council of Muslims, Stephen Kramer and Aiman Mazyek, who on Monday made a joint visit to the bedside of Sherbini’s husband, spoke of the “inexplicably sparse” reactions from both media and politicians.

They said that although there was no question that the attack was racially motivated, the debate in Germany had concentrated more on the issue of the lack of courtroom security. “I think the facts speak for themselves,” Kramer said.

The government’s vice spokesman Thomas Steg rebuffed the criticism, saying not enough was yet known about the details of the incident.

“In this concrete case we’ve held back from making a statement because the circumstances are not sufficiently clear enough to allow a broad political response,” he said, adding: “Should it be the case that this was anti-foreigner [and] racially motivated [the government] would condemn it in the strongest possible terms”.

As hundreds of Arab and Muslim protesters demonstrated in Germany, and observers drew comparisons with the Danish cartoon row, Egyptian government representatives in Berlin said it was important to keep the incident in perspective.

“It was a criminal incident, and doesn’t mean that a popular persecution of Muslims is taking place,” Magdi el-Sayed, the spokesman for the Egyptian embassy in Berlin said.

But because it occurred just days after Nicolas Sarkozy gave a major policy speech denouncing the burka, many Egyptians believe the death of Sherbini is part of a broader trend of European intolerance towards Muslims.

The German embassy in Cairo has sought to calm the situation, organising a visit of condolence by the ambassador to the victim’s family and issuing a statement insisting that the attack did not reflect general German sentiment towards Egyptians.

There have been repeated calls by protesters for the German embassy to be picketed. The Egyptian pharmacists’ syndicate said it is considering a week-long boycott of German medicines.

The victim’s brother, Tarek el-Sherbini, labelled Germany as a “cold” country when interviewed by a popular talk show host. Media pundits such as Abdel Azeem Hamad, editor of the daily al-Shorouk newspaper, have attributed the western media’s disinterest in the story to racism, arguing that if Sherbini had been Jewish the incident would have received much greater attention.

Politicians in Egypt have been scrambling to ride the groundswell of popular feeling. But some commentators have criticised reaction to the murder as a convenient distraction for the unpopular regime of President Hosni Mubarak, which is currently being challenged by a nationwide series of strikes and sit-ins.

“The tragedy of Marwa el-Sherbini is real, as is anti-Arab racism in Europe and elsewhere, but … her death has been recruited to channel resentment of the west, Danish-cartoon style,” the popular blogger The Arabist said.